My Recipe for Pad Thai and The Truth Behind Its Origin

This famous stir fried, rice noodle dish has a fascinating history. Surprisingly, the dish is relatively new. It became particularly popular during the Second World War and has been known from that time as one of Thailand’s national dishes. A man named Plaek Phibunsongkhram (known as Phibun) staged a coup which resulted in the Thai monarchy losing their absolute power. Phibun crushed an uprising launched by the Royalists and cemented his place as Prime Minister for the first time in 1938. Phibun’s campaign for Thai Nationalism sought to Westernise Thailand. He was responsible for Thailand changing its name from ‘Siam’ to ‘Thailand’. He wanted to create an individual identity for Thailand and this meant staying clear of any influences from countries such as China. At the time, most people ate wheat noodles from China. Phibun wanted to increase Thailand’s main export of rice, he introduced this rice noodle dish. ‘As part of his campaign, Phibun ordered the creation of a new national dish: Pad Thai.’ The new noodles created were named ‘Sen Chai’. ‘Phibun’s government not only disseminated the recipe for Pad Thai, but encouraged street vendors to make and sell it throughout the country.’ 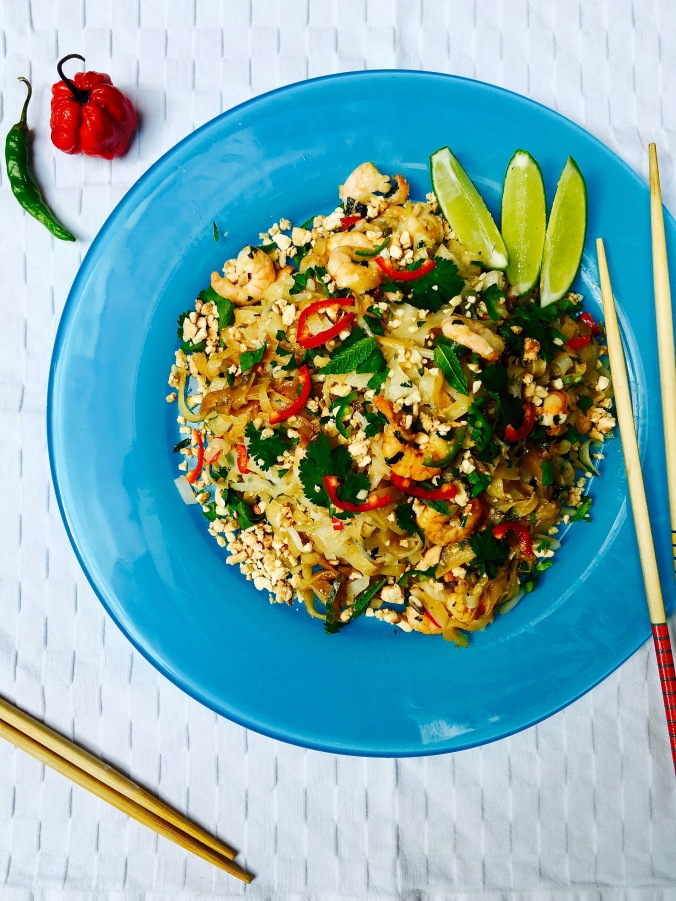 Furthermore, the 1930’s were a particularly difficult time, economically, and therefore Pad Thai, with its cheap vegetables and sources of protein were perfect to keep the Thai’s going. Phibun didn’t only create a national dish but also improved the nations diet by doing so.

However, the ingredients in Pad Thai had come over from China originally. ‘In fact, just about every ingredient found in Pad Thai isn’t native to the people after whom the dish is named.’ I still think Pad Thai is correctly named as it had such an impact on the nation, all thanks to Phibun.

Original Pad Thai recipes contain ingredients such as banana flowers, tamarind, pickled radish, dried shrimp, Thai basil and Thai mint. I wanted my version to be available to everyone.

There may seem like there are quite a few ingredients but, I promise, they are all available in Sainsbury’s local and they all need to be included! Obviously, if you are vegetarian or vegan you can take out the prawns and the egg. 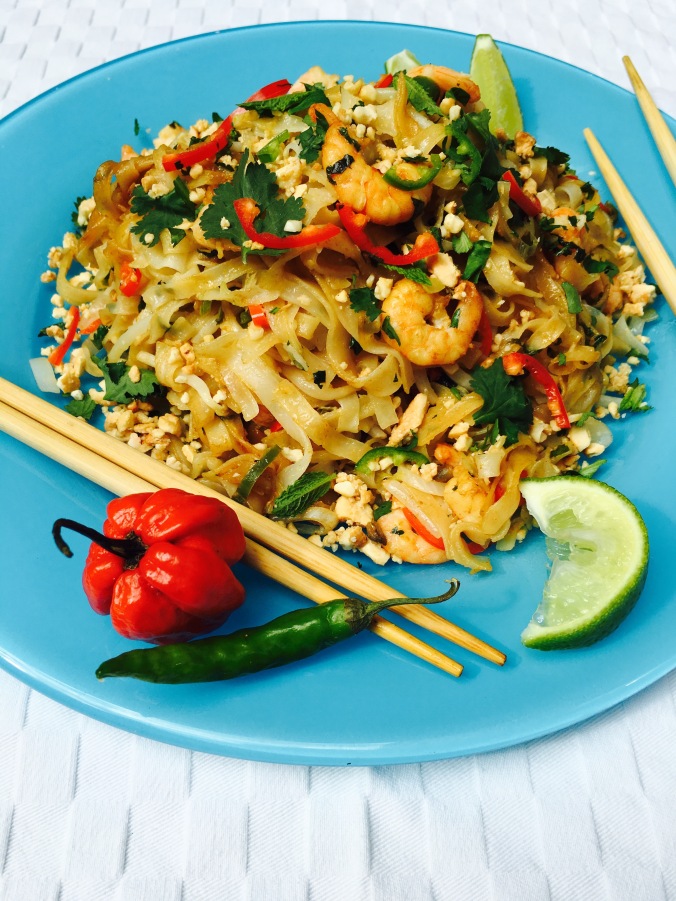 130g Wide Rice Noodles (about half a packet)

2 Limes (plus an extra one for garnish, to squeeze on top at the end)

1-2 Chillies (cut in half, discard the seeds and finely slice  – I use one red and one green for colour, but it’s completely up to you. Chillies from the supermarket can often have no spice at all so use however much you like but be careful)

A Few Handfuls of Beansprouts

1 Tablespoon of Honey of Maple Syrup

A Handful of Coriander and Mint (chopped)

Prepare all of the ingredients above. The cooking time is very quick so make sure everything is ready and organised.

Cook the rice noodles following the instructions on the packet. Usually you pour boiling water over them, leave to stand for 3 minutes and then drain. Run cold water over them until they are cold and then stir a tablespoon of oil through them so they don’t all stick together. Leave to one side.

Put the lime juice, fish sauce and brown sugar into a bowl and stir together. Leave to one side.

Put the peanuts on a baking tray and put in the oven to roast. Nuts burn very easily so be careful, you just want them slightly toasted (3-5 mins). You can do this in a frying pan too. Once slightly cooled put into a blender with the honey / maple syrup and a pinch of salt. Pulse a few times so that they are chopped up. Leave to one side.

Heat a few tablespoons of oil in a wok (or a large frying pan). Keep the pan on a medium/ high heat. Fry the prawns for one or two minutes on each side, depending on the size. Add the chilies and garlic. Fry for one minute.

Add the spring onions and noodles stirring until warmed through. Add the lime juice, brown sugar and fish sauce mixture, stir. Add the beaten egg and stir until you can’t see any raw egg.

Add the beansprouts, half the nuts and half the chopped herbs, give it one final stir and then serve immediately once hot. Garnish with the left over nuts and herbs and a wedge of lime.