While travelling through the backwaters of Kerala I came across men, alone on little fishing boats. Normally, the fishermen go out in at least twos in order to gather the net together. When I looked closer, I saw that the fisherman was just pushing a long pole in, up and down the bottom of the water. I asked our boatman what was going on and he explained that they were collecting mussels from the bottom of the backwaters. All down the waterways there was mussel fishing activity. There were beautiful women in saris washing mussels on the banks and heaps of mussel shells being dried out. 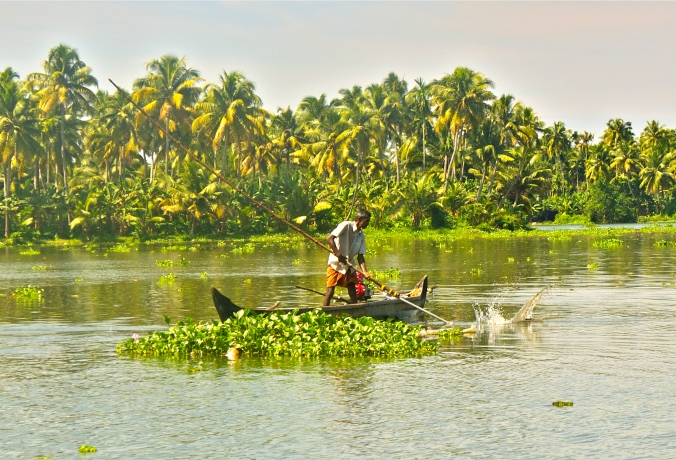 The mussel dishes I had in Kerala never came with their shells on like I am used to. Mussel fry is a dry (no gravy) spicy dish of mussels prepared very differently to our ‘Moules Frites’ dish in Europe. In Southern India the flesh is removed from the shell and marinated in a mixture of spices before being panfried in oil. 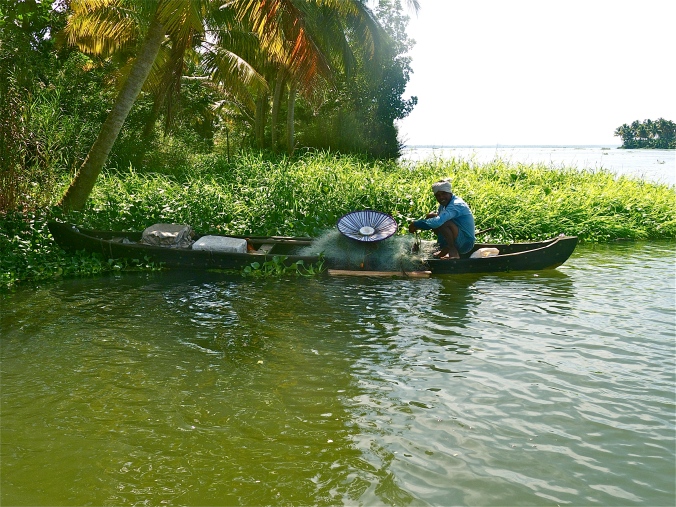 Our boatman in Kerala told me that the shells are dried out, ground up and made into lime, which is used to make concrete. This is very Indian – allowing nothing to go to waste. ‘Backwater mussel culture is a decade old phenomenon along the Malabar coast and opens immense potential for resource and employment generation among coastal communities especially women living below poverty line.’ 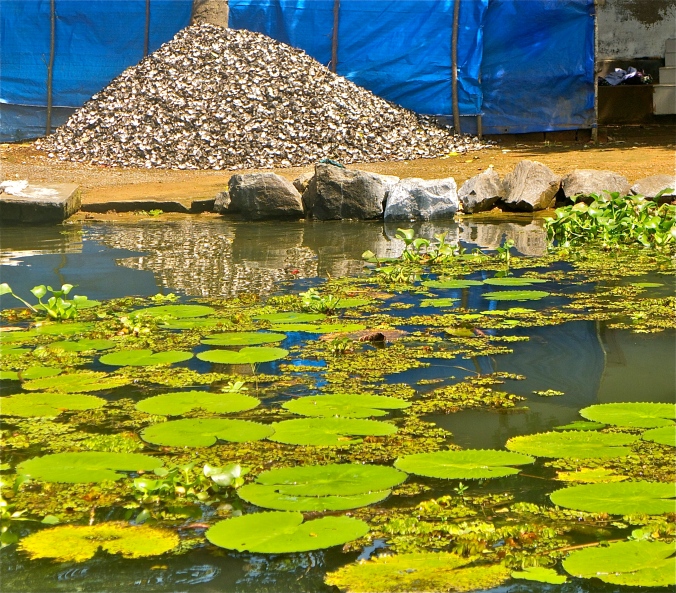 Mussels eat plankton by using their body like a snorkel, filtering water in and out in a U-turn. Mussels actually clean the water they are living in. If you spot them when you are about to take a swim, you can feel at ease as they only like to live in clean streams and rivers so that it’s easy for them to eat and reproduce.

The word mussel dates back to the Roman times. The Romans called them ‘musculus’ meaning ‘little mouse’. I guess they could be mistaken for a very tiny mouse hiding in their shells – quite strange though. Another idea is that there was confusion between the mussel and the muscle holding the bivalve, having similarities to the shape of a bicep. Either way the ‘little mouse’ is held in place by the muscle of the mussel!

The French claim to have had the first mussel farm all the way back in 1235. However from 500BC there is evidence that the ancients were lowering rope and branches into shallow waters for mussels to cling on to so that they could capture them to eat.

The Ancient Romans had a recipe for mussel balls. These are mussels, steamed, pounded to a paste, combined with eggs and grain and roasted over hot ashes. Almost like a mussel meatball.

I have traipsed through various mussel recipes. I didn’t want to choose something predictable like mussels with garlic and white wine so, in an attempt to try out marinating and frying mussels, i looked at the traditional Kerala dish Kallummekkaya Olathiyathu, Mussels Fry. After capturing the mussel men hard at work on camera, i thought it seemed appropriate to try out some of the recipes that their wives would be cooking for them on their return from the backwaters. 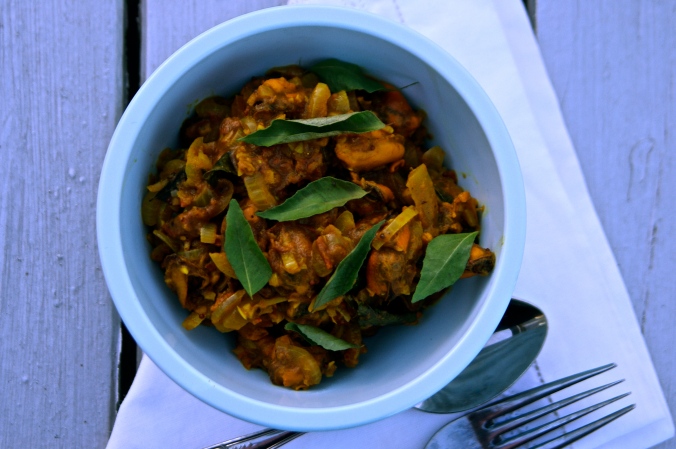 After testing a few i have put together what i think is the most delicious Kerala mussel  curry. I know it sounds odd, but trust me, it’s super quick and tastes and smells like south India (i know that sounds cliche, but i promise the whole of Shepherds Bush knew i was cooking that day).

This serves 3-4. Serve with rice. (We actually wrapped it up in left over duck pancake wraps from dinner the night before)

2 tsp Chilli Powder (depending on strength)

Put the mussels in a pot and pour over a kettle of boiling water so that the shells open. Drain the water and remove the flesh from each shell. Throw away any that don’t open. Make sure you remove the beard off each mussel.

Mix together the garlic, turmeric, salt, chilli powder and vinegar and marinate the mussels in this paste for 15-30 minutes.

Fry the mussels on a medium heat for 10-15 minutes in a tablespoon of coconut oil.

In a separate pan (i used a wok) heat 3-4 tbsp of coconut oil. When it’s hot add the curry leaves and mustard seeds. After a few minutes add the onions and ginger and fry until the onion is translucent and starting to soften. Add the tomatoes and green chillies. Cook for a few minutes.

Add the cooked mussels (including any of the marinade) into the onion pan. Stir together on a medium-high heat. Add the ground coriander and garam masala. Add half a cup of water and then simmer for 10-15 minutes.

Add some salt if necessary.  For a dry fry, cook until the liquid has evaporated. Finish with a sprinkling of curry leaves. 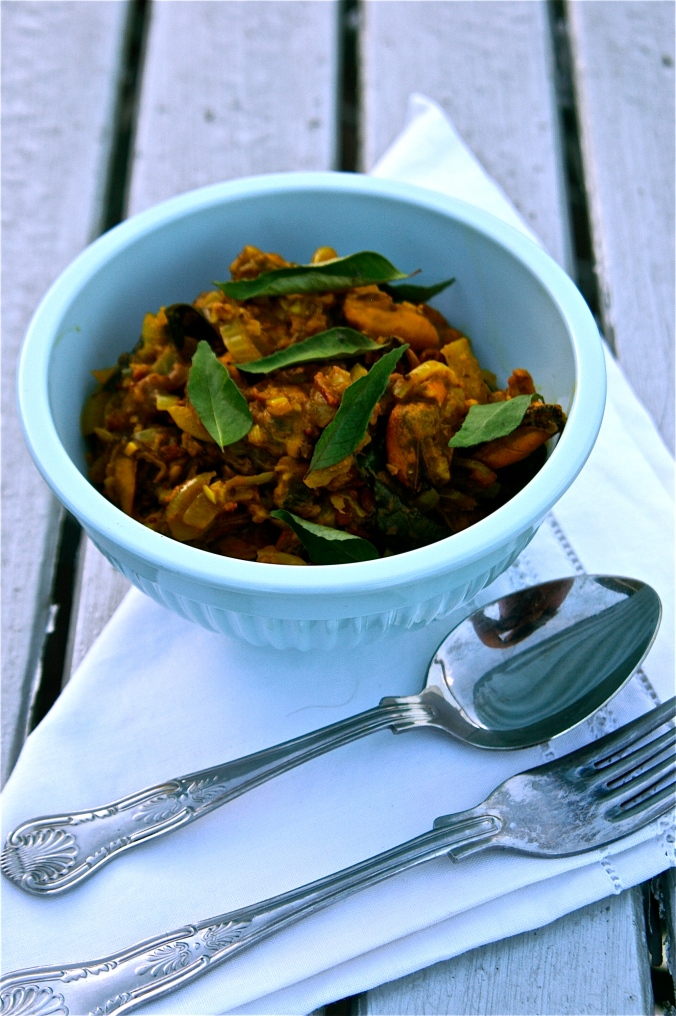 Why not try trying mussels a different way!