Historical Aphrodisiacs at The National Gallery with Tasha Marks

Last week i was lucky enough to be able to work with Tasha Marks, creator of AVM Curiosities. (http://www.avmcuriosities.com).

AVM Curiosities at The National Gallery.  A Table of Aphrodisiacs.

She puts on splendid displays and events connecting food, art and history. This time, as Valentines Day was looming around the corner, she was putting on a workshop about historical aphrodisiacs at The National Gallery. On the night i was in charge of crowd control. Everyone seemed dizzy in love and desperate to try Tasha’s aphrodisiac creations. The week before i had helped Tasha look through books such as ‘The Encyclopaedia of Aphrodisiacs’ to find out more about what was claimed to ‘get people going’ as far back as during Cleopatra’s time.

I wanted to share with you some of the interesting stories I read about and interesting food objects that i found had super powers in tempting ladies and men into the bedroom, supposedly.

The definition of an aphrodisiac in the Oxford Dictionary is ‘a food, drink, or other thing that stimulates sexual desire.’ 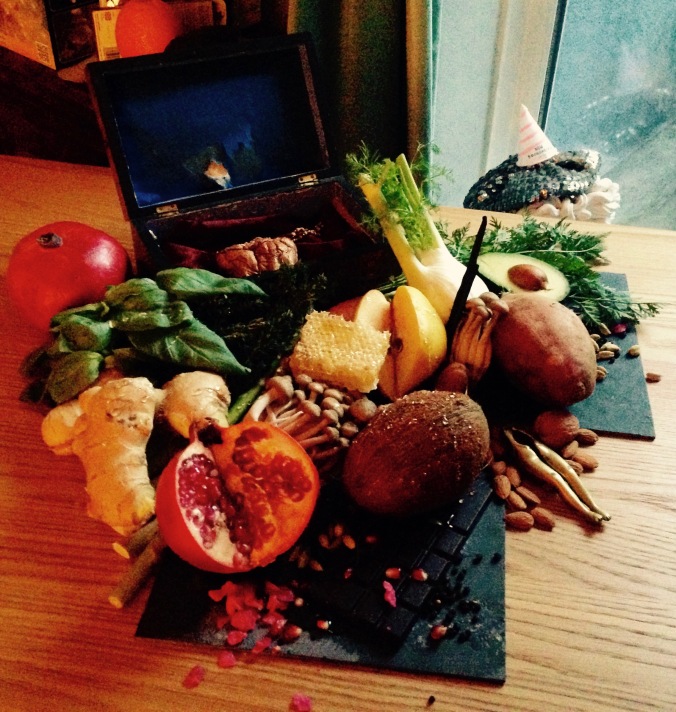 So, most typically one would think of oysters and champagne. However neither of them are actually proven to increase levels of sexual desire, often to do with influencing levels of hormones. Basically anything that can be recognised as new, exciting or expensive can be seen as an aphrodisiac. Believe it or not, when potatoes first came to England they were seen as damn sexy!

Food objects that look in any way phallic or similar to genitalia were automatically seen as an aphrodisiac, perhaps as they would get the mind wondering. Asparagus, being long, coconuts (literally being seen as hairy balls), oysters supposedly having similar visual properties and a ‘similar mouth feel’ to female genitalia were all labeled as aphrodisiacs. Once you start researching almost ANYTHING can be described as an aphrodisiac, it just depends how creative you are! An artichoke was seen as tempting because of the way you ate it. It was like you were undressing your partner, pulling off each leaf one at a time and then feasting on the fleshy part of the vegetable.

Originally infertile women and men would be ‘treated’ using aphrodisiacs. If a man was suffering from erectile disfunction ‘windy meats’ such as beans would be prescribed. They thought the force of wind would enable the man to have an erection.

As far back as the Roman times they would go as far as to eat bone marrow and menstrual blood to try and have a baby.

Cleopatra was a big supporter of aphrodisiacs. She would take them daily as well as feeding them to her lovers. She was known for drinking pearls dissolved in vinegar.

There was a Roman Emperor who’s wife fell in love with a gladiator. The Emperor was furious and followed instruction on how to make the gladiator seem repulsive to his wife. Each day his wife was made to drink a small amount of the the gladiators blood and apparently this worked. She no longer had eyes for the handsome gladiator and the Emperor was very happy indeed. Why the Emperor didn’t just kill the gladiator straight away seems quite odd to me!

All of this information needs to be taken with a pinch of salt. Each book we read contradicted a point made in another book. I just found it fascinating to research this topic however much truth there is in it. It hasn’t made me run to the shops to stock up on all vegetables that resemble genitalia though!

Lastly here is her recipe for the biscuits I made.

‘The Kama Sutra claimed that ‘by constantly eating these biscuits, one’s sperm acquires such force that it is possible to sleep with thousands of women who, in the end, will ask for pity’ – this my have a teeny tiny hint of truth as recent studies have shown that the velvet bean increases levels of dopamine in the brain.’

* Then add the egg yolk, sweet potato and velvet bean and briefly beat

* Refrigerate for a couple of hours to stiffen mixture – if needed

* Roll mixture out to 1cm thick and cut into rounds