As a nation, we are obsessed with burgers. Burger restaurants swarm every high street. Constant variations of the original recipe secure its place on menus from pubs to Michelin starred restaurants. The brioche bun arrived and gave the standard pub burger a whole new lease of life. Now extra toppings such as exotic cheeses, maple bacon and chorizo boost the humble burger into a classier and often quite a pricey meal bracket. Then there are the endless sides of truffle and parmesan fries (I always feel ripped off when fries are sold separately), mac n cheese and onion rings. Craving a burger can mean two things. You either crave the Mac Donald’s type burger that you can flatten into a pancake and eat in a few bites or, you want the burger with a huge skewer that is just managing to hold all of the different colourful layers in place, with a side of stacked hand-cut chips. Both have their moments.

So, where did the hamburger come from? The minced meat steak originated in the 19th Century in Hamburg. As refrigeration wasn’t available they had to use up meat quickly. They would mince up the parts of the cow that hadn’t yet been sold and mould it into patties with onion and seasoning to shift the produce quickly. This was called the ‘Hamburg Steak’. The bun didn’t arrive until later when German immigrants came to America. They opened up restaurants that served the Hamburg Steak. The thousands of workers at the steam factories in America needed a quick and affordable lunch that they could eat standing up and on the go. Here was born the burger bun. By 1900 it was considered an American classic.

This is my go-to burger that is fancy enough, but not pretentious.

If you don’t have one of the ingredients, it doesn’t matter – just leave it out.

And then if you fancy …

Juice of Half a Lemon

Pre-heat the oven to 180c. Lay the bacon out on a wire rack on top of a baking tray. Sprinkle with a little brown sugar and drizzle with honey. Put in the oven for 10-15 minutes until crispy and caramelised.

Heat a small pan, add a drop of oil. Add the chopped white onion and the garlic. Take off the heat when it has become translucent – 4-5 minutes.

Put all of the patty ingredients in a bowl and mix together. Divide the mixture into four and shape into patties. Push your thumb down half way in the centre of each patty so that they don’t dome when they are fried.

Heat a frying pan with a little bit of sunflower oil so that the patties don’t stick. Fry the patties on each side for 4-6 minutes.

Mix all of the aioli ingredients together in a small bowl and set aside.

While the patties are frying, slice your buns in half and toast them in the toaster or in the oven.

When the patties are almost cooked lay sliced cheddar on top of them in the pan so that the cheese melts.

Build your burger – Butter your bun and slather with the aioli. Start at the bottom with salad, the patty, melted cheese, caramelised bacon, red onion, tomato etc …. keep on building. 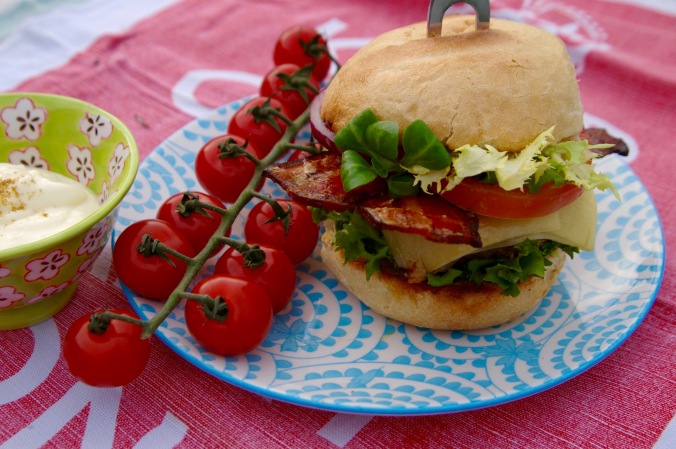