I became fully obsessed with momos whilst in India. They are the perfect snack or meal when you are sick to death of curry. However, the standard of them would vary so much between each street stall / restaurant. Some of them would arrive beautifully steaming hot with carrots carved into flowers as a garnish and a bowl of dipping sauce in the middle. At the office I worked in, in Delhi, we would have momos delivered for lunch. They would arrive crammed into a tin foil take away bag, all stuck together. We would always be greedy and starving, piling these piping hot momos into our mouths. The sauce came tied in a small plastic bag, often exploding onto our laps as we hurriedly burst them open.

After researching momos I came across an article that discussed the arrival of this street food snack in India and the effect they have had on society. ZeeNews uses momos to link the rich upper classes of Delhi to the poor street sellers. Everyone has gone mad for these steamed dumplings. In Delhi ‘one class sells it and the other eats it’. Every single housing colony, office complex and market place has a momo street seller. This is down to the Tibetans.

The Tibetan immigrants, illegal and legal, fled into India to escape the Chinese government. ‘Tibetan refugees have settled in India by the tens of thousands since 1959, when the Tibetan spiritual leader, the Dalai Lama, and many of his followers fled to northern India to escape a Chinese crackdown. India hosted some 110,000 Tibetan refugees as of the end of 2001.’ The big cities of India such as Delhi and Bombay are seen as lands of opportunity. Delhi in particular is a melting pot. You can find every different type of cuisine that you could possibly imagine. Delhi is very accepting, welcoming new foods with open arms. The Tibetan refugees living in exile make their living selling momos on the street.

David Johnson’s short documentary film on master momo makers in Dharamasala is mesmerising. They wake at 3am to prepare the vast amounts of dough and fillings for their vegetarian momos stand.

When refugees travel they carry with them culture, lifestyle and most importantly food. They bring flavour, spices and tradition in their belongings and in their backpacks!

‘Momo’ comes from the Chinese, meaning ‘steamed bread’. The dough is simply made from water and flour and then filled with ground meat, vegetables or cheese. These can be served steamed or fried. The simple dough casing enables a convenient carrying case to the meat and vegetables, perfect for transporting a meal. Originally they were filled with yak meat or water buffalo. However, vegetarian fillings became more common as that was all that was available for the Tibetans in exile.

Momos, as a rule, are not allowed to served at New Year in Tibet as their closed shape is considered to be auspicious in a time of sharing and generosity for the year ahead.

After trying hundreds of them, I have come up with what I think is the most delicious Pork, Chilli and Cabbage Momo.

400g Pork Mince (if you can’t find ground pork open up six good quality sausages and use the meat from them).

Mix all of the dough ingredients together in a bowl. Bring the dough together and knead on a flat surface for 8-10 minutes until smooth. Put the dough back in the bowl and put a damp cloth on top of it so that is doesn’t dry out.

Put all of the ingredients for the filling into a bowl and mix together with your hands so that they are all really well combined.

Flour the table surface and take a small piece of the dough. Using a floured rolling pin, role the piece of dough into a circle, about 6-8cm in diameter. Make sure it is very thin. Momos with thick dough are disgusting. They will expand when cooked. Take a heaped teaspoon of the mixture and put it in the centre of the dough.

Either fold the dough into a semi circle and pinch the sides around (a bit like a Cornish pasty) or pull all of the outside edges into the centre and squeeze in the middle. If you are having trouble making the dough stick, use a dab of water.

You can use a steamer to cook your momos or if you don’t have one, a saucepan of boiling water with a colander and a lid on top will do the trick. Make sure to grease the colander or steamer, before placing the momos on to steam, otherwise they will stick.

Steam for 12-15 minutes. Make sure the pork mince is cooked completely through (all white and no pink). Serve immediately with either soy sauce or sweet chilli! 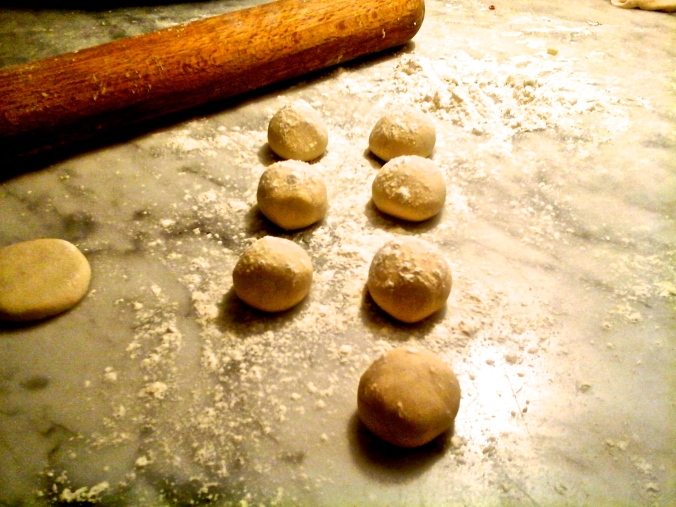